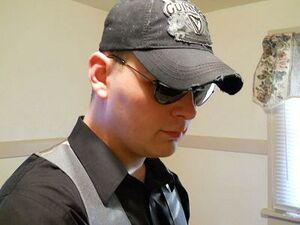 Real Name: unknown except by Rhage himself

Little is known about Rhage. He was Acknowledged in the Domain of Kenosha in early 2009, and then went for a walkabout. Nothing is known of him while he was on this walk about and nothing is known of him about his embrace or his mortal years except that he was a soldier in the 391st of the United States Army stationed in Korea.

Rhage returned to Kenosha in September of 2010 to find his family in slight disarray. He began his trek to becoming Primogen, finally attaining the seat in late Feb of 2011 after Stick Desylvia awarded him the seat for his potential in the political aspects, and his leadership abilities.

none that he is aware of

Myself, Rhage and Wrath from the black dagger brotherhood series

"Waking the Demon" Bullet for my Valentine