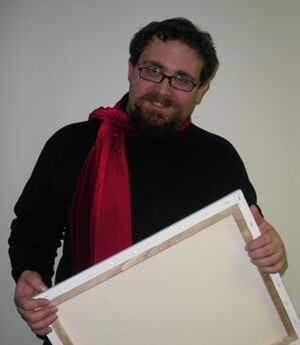 Brian resurfaced from his lab in 2016, greatly enlightened. He was quickly made Primogen of Clan Malkavian in Hartford, a position for which there would soon be a need. A new Malkavian Prince emerged in nearby New Britain, and then everything went crazy.

In October 2016 a freshly made Malkavian Neonate came stumbling into Hartford, having learned about us on the internet. He was placed under Brian's accounting, and Brian did his best to teach the young Malkavian what he understood about the ins and outs of polite Kindred society. In some ways, he appears to have done exceedingly well, in others, terribly poorly. Nick burns bright and fast, gaining status outstripping his 'sire' within a year's time. Brian is very proud of him, he has said. Somehow, all the intrigues surrounding Biltmore and Quentin King seem to focus on Nick when they seek an outlet, and Brian tries to put the pieces of a larger picture together than even Nick's puzzle obsession may be capable of seeing.

Brian recently recovered the BB Girl project, a sentient AI trapped in a robot shell he'd sold to a Toreador. He believes he must teach her the meaning of love. Some people told Brian that love is a warm gun. Others (women) tried to get through his (male) skull that that wasn't right at all.

Brian has managed to gain a degree of leadership over a pack of Anarchs. He was very close to The Prince and Seneschal, and other city officials, as well as friendly with the Nosferatu Prince of Westchester Edmond Dantes. This has all changed recently. Brian is now persona non-gratia among many of the city's officials since resigning his post and being publicly humiliated for his sins.

Not sure who Brian could call an ally anymore, other than his surrogate childe Nick.

Brian has some connections to the Hartford Arts Council, and maintains membership on their board. The director is a close friend and ally in Brian's struggle to bring Hartford the cultural clout it deserves. Brian's new connections with Comedy Central are proving very beneficial to the region, causing the creation of about 50 new jobs in entertainment in the area. These people love him, and owe their livelihood to him. He treats them with the respect and courtesy they deserve, and he does what he can to foster their dreams working in entertainment.

Five Years Later The show has run it's course, but he's gotten some fame out of it. He's started branching into the financial and military sectors.

He's such a nice guy, and he really doesn't step on many toes, but He's begun to stumble in his sanity and his position as Keeper of the Elysium, with his spectacular failure at the Northeast Event, nullifying the Elysium temporarily under an arcane rule instead of stripping the prince and several other Camarillans of their standing in the sect, and losing face in front of the entire gathered crowd, Sabbat and Anarchs among them. He has a professional rivalry with Toreador Primogen James Norton, whom he has fallen out of favor with due to his recent inaction on the breaches of the Elysium that occured at the Northeast Event. Brian has since resigned his post as Keeper of Elysium.

Brian made a lot of people angry by disobeying Prince Anya's edict not to go near the Whore's temple casino, resulting in months of planning, boons, favors and money to all go down the drain according to the Prince. He is in big trouble with the Prince and all of clan Assamite, as well as his own Primogen.

Brian also dislikes the WWE, claiming it's not real entertainment, just mindless fans of violence, testosterone junkies, and poorly scripted matches that a child should be able to decipher. He uses every opportunity in his cartoons to lay the smackdown on World Wrestling Entertainment. There are rumors he helped fund Chris Murphy to defeat Linda McMahon in the recent election.

No one remembers that stuff anymore. Funny how few people stick around any length of time.

Brian has no childer he knows of, and no current want for any more headaches.

Two ghouls are enough trouble. - Note, His two original ghouls were killed under mysterious circumstances. He had been seen recently with the infamous womanizer "Arturo 'Mr. Fandango' Calivari", but it appears that Brian has abandoned Arturo. He has been seen wandering around the tri state area with a new ghoul. There are rumors that the ghoul is a criminal who wronged Brian seriously in the past, and this is his punishment to the pitiful creature.

Brian has begun to show off some of the larger robots he's built, with combat capabilities.

Brian still hasn't sired, but he's had one successful surrogate under the accounting, and has a second one who is flighty. Additionally, his sentient Robot BB Girl has come home and is being reworked into a sort of... childe.

Unknown. He lost touch with his sire, and never got to know if he has any other vampiric siblings.