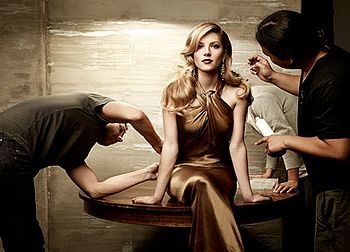 Physical description: She is a young and very beautiful lady, one might say stunning and elegant, of fair skin, medium height and a proud presence, despite her delicate figure. She has blond hair and green brown eyes.

Maria Eduarda is a young, beautiful and brilliant lawyer, with foreign education, that began her career winning major clients and cultivating contacts. After making a reputation with an excellent performance as a legal consultant on political campaigns and lucrative business contracts, she consolidated her legal office.

She is best known as an attorney and Company Law Consultant, but she also deals frequently with the legal needs of foundations, NGOs and other institutions of the third sector.

She is also notable for promoting many social actions by sponsoring and promoting projects aimed at democratizing the teaching of arts, education of children, adolescents and adults in communities, and free legal assistance to low-income populations, with an emphasis on extra-judicial mediation and conflict resolution.

As a businesswoman, she deals with Arts, Culture and entertainement, producing and promoting events, and owns a Cultural Center named "Usina Cultural".

She is a well-known character of the local cultural and art scene (being one of the producers and investors of the "Guia Cenário Cultural"), reference in style and part of the high society.

She calls them friends.

"Quid pro quo, Clarice", when asking questions to David Atticus, while being interrogated by him.

(Guild only) "This is what the area needs. Someone who does not shrink from scrutiny. Someone strong and not afraid to be bold when they have a goal, a vision", Katherine de Montpellier, to her Court.

"Eu considero manter a esperança, o gosto pela vida e o otimismo como minha forma pessoal de combate ao infernalismo" ("I consider keeping hope, the taste for life and the optimism my personal way of fighting infernalism"), to Jorge Emiliano, while trapped at the same Tremere party, that was being "attacked" by spirits.

"Se eu fosse propensa a este tipo de vaidade, eu consideraria adicionar este epíteto ao meu nome..." (If I were prone to that kind of vanity, I would consider adding this epithet to my name ..."), to Prince Demitri Armorieri, when he stated that she was like a Phoenix, returning from the ashes. 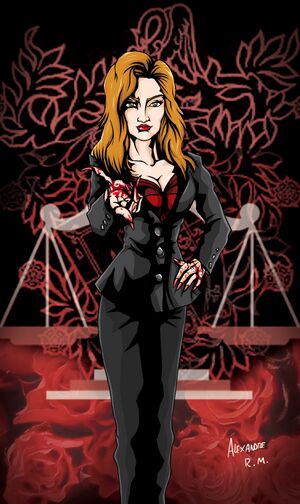 When her sire was Prince and she was harpy, it seemed that they tended to favor each other.

She disappeared because of a hunter attack that killed almost all Toreador, but she got lucky. Too lucky to be true.

It seems she is still very devastated by the destruction of her sire and truly loved him.

They say she dated all the men of her Domain, but that is a lie. It was only half of them.

The Nosferatu wants her dead.

Many believe she was nothing but a lackey of Archon Ana Paula, from the days in which Maria Eduarda used to be her Lesser Harpy, who was the real controller of the Harpy office of Parahyba.

Some say she didn't like to return to Court and see Ana Paula in "her place" as Harpy.

It seems that, even for a neonate, she has very important friends within her clan.

They say that the Nosferatu Constâncio didn't like her stripping his favorite status and started to consider her an enemy, ready to kill her. That status was soon returned to him by her Prince.

Continued as Seneschal after the fall of the former Prince .... she orchestrated this praxis.

She is the lover of a Ventrue Prince.

Deceased for good this time.