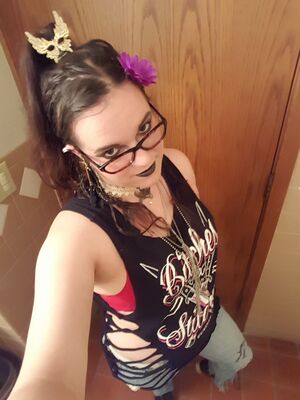 Physical description: Jack looks like a two bit whore. She wears gobs of poorly applied make-up, hair frequently teased out. She wears far too much jewelry and clothes that are all ripped, stained or torn. She is short and wears glasses.

Jack seems to have travelled around quite a bit before settling down in Iowa City because of a bet. She rescued a bunch of children from Snipes and became King of the Snipes. She had a statue follow her around after unfortunately killing it. She celebrates Brujah Christmas and seems to constantly be in trouble.

No one seems to know exactly who made that.

“There’s no such thing as Snipes.”
“Wear-corn. It’s gonna be a thing.” –Jack when talking about weird happenings.
“I’m inclined to believe her. I know what she is saying makes no sense, and isn’t even feasible. But weird shit keeps happening and she frequently notices first.”

Jack is actually a Malkavian.
Jack served a lot of time in jail.
Jack likes nuns.
Jack loves being called Jacqueline.
Jack was staked within 2 hours of entering the state of Iowa.
Jack offered to take someone under her accounting to kill them.
Jack is a great driver.
Jack lives in a house made out of C4.
Jack wears a flower that has a demon trapped in it.