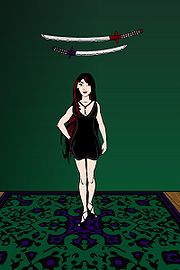 
Unknown outside of her closest allies.

Presumed to be Michiko Takanawa.

A little learning is a dangerous thing; What happens when you drown in the Pierian spring?

Michiko is a tiny Japanese woman, about 4'11" and small of build, with long dark hair, warm skin, and green eyes. She is pretty enough, but her features are youthful and her small size only emphasizes the lack of maturity in her appearance. In her last year of frequent public appearances, she favored appearing as a Caucasian blonde woman of athletic build and medium height in her late 20's.

Michiko Takanawa's first known appearance in North America was in the court of Gimli in November 2003. She spoke very little English, but picked it up very quickly and was soon made Whip of Clan Ventrue. Over her time in Gimli, she held the positions of Whip, Primogen, Harpy, and Sheriff. In late 2005, she moved to the domain of Fargo, where she had been a frequent visitor, and held the positions of Primogen and Harpy. Her appearances declined after December 2006; her last known public appearance was in November 2007 in Fargo. She had said she was going to do research and assist the efforts in San Diego. Few, if any, have heard from her since.

She is a renowned chemist, specializing in drug effects on Kindred and chemicals that mimic Kindred behaviours in mortals. Her research was compiled for Black Mariah and the New York Siege efforts, but something caused her results to never be released or used to date. Her ability to manipulate influence in her region was respected and she was particularly effective in managing the control of the streets.

She has been allied with several like-minded groups of Kindred over the years, but she is not currently known to be in any coteries.

With a list of deceased allies that long, it's assumed there are a few.

A from-scratch character concept, but has taken later creative inspiration from:

"The Chemicals Between Us" - Bush

Donald Oates: "We got out because of Michiko's dog. Michiko's dog is SUPA GREAT. His name is Inu-Chan Supa Numba One Supa Puppy. He climbed through the air ducts of Elysium."

Said by Michiko herself:

Michiko: "What sort of influence do you bring?"

Icarus: "I have bus people."

Michiko: "Transportation? Okay. I know what we can do with that."

Icarus: "Right! You know, they buy fare instead of rent. *singing* Buuuus people, sittin' in the back and droolin', buuuus people, not quite ready for the ghoulin'!"

Michiko has been or is currently involved with the Setites.

Michiko is a member of the San Diego Siege team.

Michiko has not been seen because she is operating publicly under an assumed identity.

Michiko is responsible, directly or indirectly, for the deaths of many of her allies.

Michiko has not been seen because she is under a sentence of service for her involvement in the death of Lorenza Leducci.

Michiko has studied several paths of morality and has rejected them all, believing them to not be enough.

Michiko is responsible for the destruction of Gimli's Church of Furby.

Michiko cannot be trusted, she has been known to betray her allies or clan when the price is right.