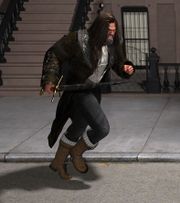 Merek grew up in Manchester England in the mid 1800’s as an orphan and a Scuttler (a youth based loosely organized crime gang based in Manchester). As he grew up his reputation and standing in the crime world grew. He eventually became a key hitman for one of the largest mob organizations in the UK. He developed a close friendship with the boss he worked for by the name of Jim “The Razor” Thorpe (10th generation Brujah). The Razor was known for his mysterious abilities to eliminate problems quickly and always survive. He never worked during the day and the reason for this was of course his Kindred secret. The Razor was a part of the Camarilla and used his crime power to help keep the veil over the mortal world in Manchester and the surrounding areas. This secret was revealed to Merek one night after a quiet rainy evening where Merek was given the gift (curse) of immortality so that he could forever serve The Razor and the Camarilla. This plan came to a devastating end when his sire was slaughtered in a surprise Sabbat attack. Merek became even more ruthless and ambitious after this and during the following century, ended up as an esteemed part of Prince Marshall Rolands' court by 2016, eventually obtaining the position of Scourge since it fit in so well with his very skilled murderous ways. This all ended when his childe Jade was created without permission. Though their lives were spared, they were exiled. This is where they made their way to Los Angeles and find themselves today.