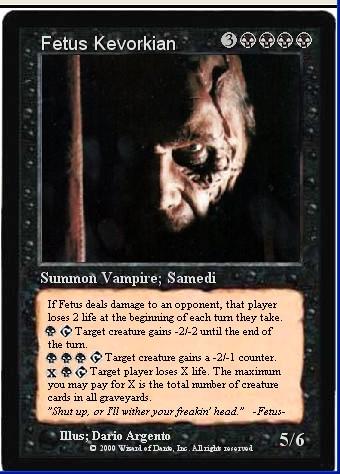 Fetus Kevorkian was a embraced as a sabbat Malkavian joke. A pack of Malkavian Antitribu called Les Miserables kept a wassailed, quadriplegic samedi, nicknamed Toy, as a mascot of sorts. The Ductus of the pack, called Skin, drained the then mortal Fetus of his blood and embraced him using Toy's blood. Tortured and tormented for months in the packs asylum home, Fetus slowly developed his powers of the blood. One night, Fetus developed the power to become the form of ash and flushed himself down a toilet in the asylum cell he was in. He made his way through the sewer and into the river of Montreal. Using the waterways to Navigate, Fetus made his way southwest to the Great Lakes and down to Camarilla domains where he learned of the enemies of the Sabbat, which Fetus vowed revenge. When in Kenosha, Fetus discovered new enemies in the Giovanni clan.

Fetus joined the Camarilla in an effort to avoid end at the hands of the Giovanni Clan by hiding behind “The Promise”. He also joined because the Camarilla was the enemy of his enemy and gave him allies and ammunition against his enemies. Early on, fetus proved to be rarely gifted as a social player amongst his own blood. He researched his own beginnings and his blood found him. Fetus found himself compelled to travel to Haiti to get in touch with his own line. While in Haiti, Fetus met Baron Samedi and was quickly Loa Ridden. He returned to Kenosha, again victorious.

Years later, Fetus nearly met his end yet again when he was confronted with the choice of joining the “shadow coterie” known as the Dead Man's Hand”. He joined reluctantly seeking only that he would not be involved with breaking tradition. He was named as Seneschal of Milwaukee, Wisconsin by Alejandro Des Las Casas soon after. Fetus was named “The Baron's Voice in the Camarilla” by the Baron Samedi. Later, Fetus, himself, became the first and only Samedi Prince of the Camarilla. He promoted a new era of diplomacy with as many Princes as he could find available. It is here that he pushed for a deep blow to the Sabbat. He would ally himself with Prince Agrippa to siege the Wisconsin capital and Sabbat Stronghold of Madison, Wisconsin. Fetus Stepped away from being Prince in an attempt to keep the domain stable if he died in the siege. During the siege, Fetus tracked the Archbishop Thalleus DuChamp (also of the Samedi), and with the assistance of Archon Nicholas Tept and Stick DeSylva, found Archbishop Thalleus. Fetus destroyed Thalleus in single handed combat. The siege was successful.

After the siege, Fetus left Kenosha to shed his old ways and embrace the light of humanity in order to better serve the Ivory Tower under the watch and tutelage of Prince Adrian Serra of Los Angeles, California. Fetus now spends his time back in Kenosha quietly studying and awaiting the next siege.

Blow me with my mask down