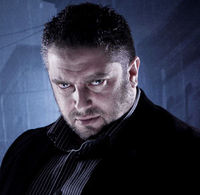 Ethan has a strong German accent, because... he's German. He has shared that he survived the Concentration Camp in Auschwitz, which gave him a souvenir tattoo on his left arm. Ethan was embraced into a non-Camarilla (Autarkis/Anarch) Brujah band after his liberation from the camps. In 1990, he made his way to the court of London and joined the Camarilla in 2000 as a newly Acknowledged member bestowed by Queen Anne.