Difference between revisions of "William Harkness"

Unknown; Harkness has commented in the past that he attended Yale University, and there are several buildings there named after the once wealthy, but now defunct, Harkness family - whose former estate is now a park on the Connecticut shore.

Generally somewhat unassuming, Harkness stands five and a half feet tall, with dirty blonde hair and glasses. He has recently upgraded his choice of suits from academic tweed to more modern and fashionable cuts in gray and purple. His cane is always to hand, and he often plays with a small orb of some sort of stone. 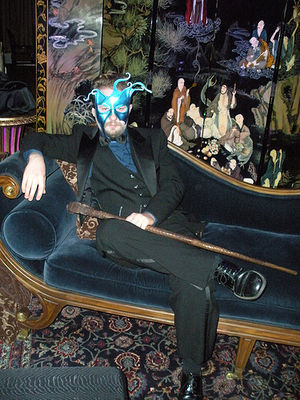 William Harkness arrived in Hartford with the New Year in 2008; for the first few months of his time there, he could usually be seen quietly sitting in Elysium with a book open in front of him. He served as a Deputy to various Sheriffs from his arrival until 2010, but as a general rule seemed to be less interested in politics than in his Academic studies.

He supported Victoria Rowlands' Praxis against Stast after it was revealed that the former Malkavian Prince had Diablerized a Sabbat Elder; later, he was involved in a series of strange happenings which culminated in a battle against a spirit of great evil. When Sariel Sefirot threatened to kill Rowlands in Elysium and take the City for himself, Harkness declared that he would not stand by and allow either to happen. Instead of stay in the city for the political collapse that followed, Harkness left for Portland, Maine.

Arriving in May of 2010, he quickly became first a Deputy, then Sheriff himself. In recent months he has traveled up and down the Eastern Seaboard and as far as New Orleans, for Prince Villon's soire.

None known, though he has often been allied with the Hartford Primogen.

Clan Tremere, including Erin Landen, Dr. Sanlin. Micah Lazarion, and Caia Wickham in the Northeast, as well as others nationally.

Harkness had an affair with Laura Rosellini, of Clan Giovanni.

Harkness has had extensive experience with strange creatures of the night, including Angels, Magi and Faeries.

Harkness spent a short amount of time on the Assamite Path of Blood.