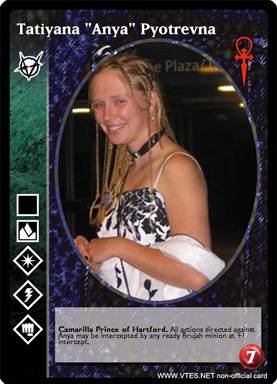 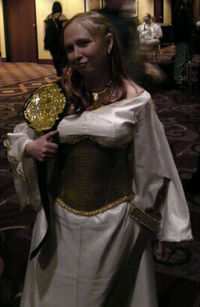 Anya with the Brujah Belt at Midwinter 2012 after the Moloch fight.

In January 2011, in the wake of a scandal where the Ventrue and Tremere were caught in a conspiracy to take Anya's Praxis, Anya called a court to execute the conspirator Upton Rowlands and was soul-stolen by Tremere elder John Reiss in the middle of court. Reiss then claimed Praxis, and Anya was exiled. Then shortly after, a Brujah elder by the name of Roman Pendragon took Praxis and held it.

A Year of Fire
In March 2011, in the heat of a passionate argument between Pendragon and Anya about Pendragon's corrupt rule of his Domain, Anya contested his Praxis. A fight ensued, and Roman Pendragon fled the Domain and left it uncontested. Anya walked back into the main gathering to claim the Praxis, which was held another 30 minutes before a different Brujah elder, Toby Ashford, contested her Praxis. Toby and Anya went and talked matters of their views of the Camarilla over in a private rant, decided they agreed, and so he withdrew his Praxis, and Anya then held the Domain uncontested.

In January 2012, an ancient Cartheginian threat known as Moloch was discovered to be amidst diabolical plans to end the world. It is rumored that Anya was overtaken and possessed by an ancient Brujah that was somehow a ghost tied to the ancient Cartheginian sword she carries. This ancient Brujah sided with its modern Clan to help remove the threat of Moloch, and in doing so eventually dissipated from Anya's form, leaving her once again whole. 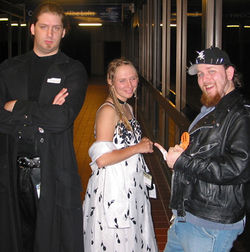