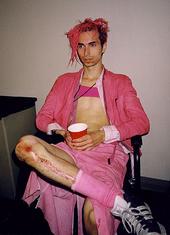 Physical description: Round, and corpulent, Stephen Vimes is covered in pustules and sores, with a wickedly wide grin that literally reaches
from ear-to-ear. His mouth is so large, in fact, that the bridge of his nose has collapsed and half of his face is nothing
but mouth, filled with razor-sharp fangs. Alternately, Stephen's most common appearance is a tall gentleman wearing a suit and
tie, most resembling a butler of medium build. Stephen, in this appearance is very unassuming and nondescript, so much that it
would be difficult to pick him out in a crowd of similar gentlemen in more expensive, high-brow settings where a suit and tie are
common. Rarely without his Giorgio Armani Smartphone, pocket watch, and metal cigarette case, Stephen is typically the last one
in a room that people would point out as a Nosferatu.

Coteries are a Death Sentence.