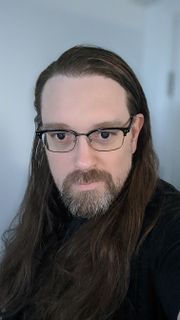 Physical description: Soren is typically dressed in black; tall boots, slacks, shirt, vest, and flowing coat. His long brunette hair hangs down his left shoulder. An obvious decorative chain hangs off his left hip. His right wrist bears a black bracelet with some silver Fleur-de-lis, and the ring on his index finger is adorned with a Lasombra crown. Behind his glasses, the iris of his eyes are Abyssal and black.

He is obviously Path Dead, and seems unnaturally inanimate when not actively moving. His appearance simultaneously reflects the costs of terrible knowledge and a beckoning call from the dark.