Difference between revisions of "Roxanne Maddox" 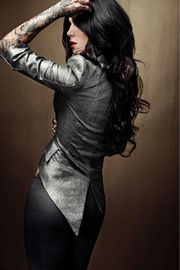 Physical description: Roxy has dark hair and grey blue eyes with an easy smirk. About 5'5, she's easy to overlook. Given her occupation, she has a stalwart build and dresses in a way to reflect her professional nature.

- Ingenious given by Prince Charlotte of St. Augustine

- Feared given by Tom Anderson of Old Dominion

- Loyal given by Prince Nelson Barrington of Old Dominion

- Feared as Sheriff of St. Augustine

Roxanne Maddox is no stranger to gang warfare and turbulence. Spending most of her time between New York, Chicago, Las Vegas, New Orleans, and Atlantic City has made an urban commando of the feisty young lady. Either way, her newest post in St. Augustine Florida is a curious assignment, decidedly lacking in glitz and glamour that marks her previous residences. Whether it's the Big Apple, the Big Easy, or now, St. Augustine, she's going to get done whatever she needs to do.

- Part of the St. Augustine delegation to a gathering in North Virginia. Roxanne was also part of the team that recovered the Toreador Primogen for Prince Oliver.

- Named a Deputy under Sheriff Ames Underhill of the domain of St. Augustine.

March 2020 - Attended a gathering in Baltimore where she was recruited into the Ivory Legion and spoke before the gathering to give a brief eulogy for Sovereign Prince Christine Strauss.

Various elements of the Expendables series.

"Sex Metal Barbie" - In This Moment

"The Hills" - The Weeknd

"Whispers in the Dark" - Skillet