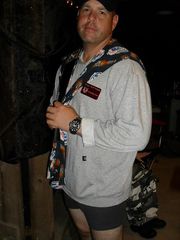 Physical description: Pompeii is a huge, powerfully built man, who radiates intimidation. His body is covered in ritual scarring and anyone with occult would know that it was Seiðr "Rune Magic". He expresses his opinions in a rather cavalier attitude, Name or Position rarely means much to him. He prefers casual clothing that accentuates rather than conceals the power of his body. He is handsome, but his physical appeal is rarely enough to overcome the sense that you personally are little more than an obstacle to destroy or a potential thrall to his will.

On Decemember Third 2016, respected Former Prince Pompeii declared, "I will support Jan's claim. I revoke my role as your Prince in favor of his reign." Jan van Rheinlander

A Berserker and Einherjar, Pompeii has recovered memories that place him within the Varangian Guard out of Italy. 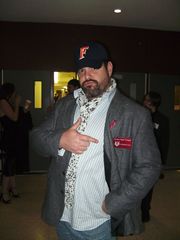 Why did this happen to me?

I was normal, a middle school art Teacher for Christ sake.

I never did anything wrong.

I had a normal job, normal life, and normal girlfriend.

Can you believe it, twenty six years old and my heart gave out on me!

I spent a year and a half on the transplant list.

I fought every day for my life.

Six surgeries, SIX! They practically cut me in half.

I'm a miracle of modern medicine, I refuse to die.

The drugs they keep me sane and numb to the pain.

After the last surgery, I woke up in a haze.

The doctors tell me if they can't find a heart I will only have a month left to live.

Why is there a doctor in my room wearing a Red Sox cap?

He says he has something that would help heal me.

It was coppery, rich and thick.

My mind is clear; most of the pain is gone.

Most of my scars are fully healed, I feel stronger than I have in years.

Then the he tells me the "punch line".

He tells me I'm only delaying the inevitable.

If I give up he will make it will be quick and painless.

The fucker bites me!

Between the pleasure and pain of his "Kiss", I fight.

No one has claim over me, Fuck off!

He gives me a strange smile.

I'll do anything to get out of this bed.

He leans in to bite again; he is not a Fag is he?

Recently Remi has had memories of another life resurfacing...

None that would claim him.

Really hates the Tremere... but doesn't claim many enemies. Maybe the people he punches in the face or threatens to beat up.

Sigh... Where would you start?

Stacee Jaxx
Guy on a Buffalo!