Difference between revisions of "Moira O’Riely" 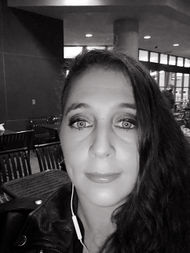 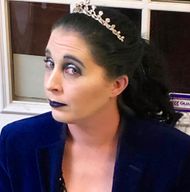 Moira in her Court Regalia 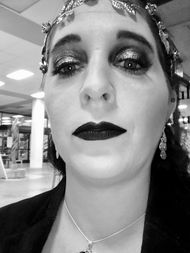 Moira in her Travel Regalia

Visible Features: Moira is 5’ 1” flat footed. She can be found in a variety of styles depending on the social function. She is known to favor purple, blue and gray. She is known to have either purplish-red, or sapphire blue hair variously, in her time in the public eye. She is Irish of features, pale, and has blue eyes which have been described as piercing. She can be seen often, with open features, smiling, laughing, or glaring as the mood takes her.

Moira O’Riely arrived in Stockton, CA in June of 2016 with her broodmate Kieran, and a specific purpose. She was quickly recognized as a useful resource; being named Sheriff first under Adrian Wolfe, and then his successor Victor Smith. She was off to a strong start, but then suddenly, she disappeared for nearly a year. When she again reappeared, it was in Sacramento, CA. She again, quickly established a purpose, and service to the Domain, that would later become hers. She became Sheriff of the Domain of Sacramento, California under first Manfred Zweig, and then under Alejandro Villalobos Patron. After his untimely demise, Moira stepped in to fill the gap, claiming and retaining the throne of Sacramento on October 12, 2019.

Known to have been granted right of progeny by

Please feel free to populate this.