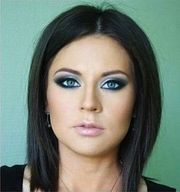 Maggie arrived in Baltimore shortly after her Acknowledgement. She lived there for a while before relocating to Washington D.C., where she was very quickly named Sheriff.

On July 3, 2017, Prince Asher Greggorson of the Marble Court publicly recognized Maggie as a Gargoyle, and not as a Caitiff.

None? Many? Clan Tremere?

None that she knows of.

Did her eye patch switch eyes?

She doesn't even need an eye patch.

She lets Kindred ride her when she flies around the city.

She kills Kindred who ask to ride her when she flies around the city.
Retrieved from "http://camarilla.owbn.net/index.php?title=Marguerite_Stone&oldid=43539"
Categories: