Difference between revisions of "Lydia Laurent" 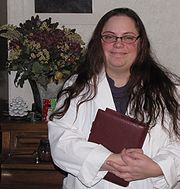 Physical description:
Lydia is unremarkable. She is not what one would call attractive, in fact, most of the time, she seems to dress unflatteringly. She had always been seen wearing black gloves and has a black shoulder bag that she often keeps books, paper and odds and ends she uses during court. As of the Conclave of 2011, she seems to have changed her palette to all white. 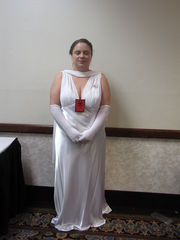 The childe of Archon Raymond Laskey, she made her first court appearance February of 2009 in Columbus, Ohio. A reserved botanist, she often spent her courts reading and avoiding large groups. Skittish and awkward socially, she avoided political contrivances and discussions; that is, until she was released from accounting, November 2009, when she became Lesser Harpy to Donovan Lewis.

He took her under his wing and began teaching her about the formalities of court and how to navigate Kindred politics. Around the same time, a marked change in her method of dress and personal grooming became apparent, and her black gloves became a signature.

Before Columbus' Grand Elysium in July of 2010, she became Tremere Clan Primogen. At her first annual Columbus Grand Elysium, Lydia was forced out of her shell and she kept herself busy attempting to put to use the lessons she had been learning.

When then Prince Hugo Valentine became an Archon, Lydia became somewhat reserved again. That is, until she was asked by former Prince Bradley P. Lazarion to replace his Seneschal. Since the Praxis claimed by Christopher Chicano, she returned to her position of Primogen for Clan Tremere and has pulled back from politics somewhat.

As of the Conclave of 2011, however, she began registering a change of name with the harpies gathered. Declaring July 7th 2011 to the Camarilla at large that she was changing her name to Lydia Laurent.

She is noted to be a proponent for humanity and would rather talk about botany than just about anything.

On Sunday, February 5th, with the death of Christopher Chicano Lydia Laurent became once again Seneschal of Columbus Ohio.

"I like flowers."
"She's a Toreador-safe zone." - said about her when she was at a table with *gorgeous* people and several Toreador.
"Don't tell me I look pretty tonight. I'm unattractive, not stupid." 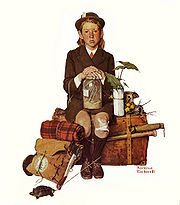