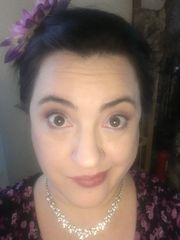 Lucy is from France (accent shows when she gets very heated or confused). She dislikes discussing her past. She apparently moved to the US for the lulz in 2007. She travelled the country for a couple years in a Winnebago, playing piano at bars and coffee houses for gas money. She ended up in Los Angeles in 2009, and made friends! Due to a prophecy that she was following, she travelled to NorCal in 2010, eventually settling in San Francisco in 2011. She was under the accounting of Angel LaRouge (Archon Alecto), who adopted Lucy. She is considered one of the Toreador by many due to this. In recent past, she has acknowledged to being related to Adrian Serra to some friends. She has successfully not pissed anyone off too much... to her knowledge. She is still playing at bars and coffee houses for gas money. Click here to send money!