Difference between revisions of "Lilyan Townsend" 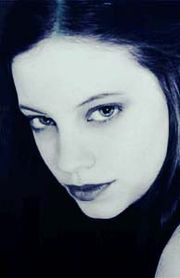 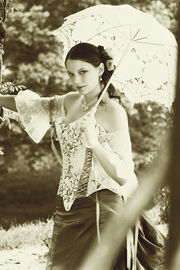 Apparent Age: Originally 20 though recently it appears she has aged to 25-26

Physical description: Lily is 5' 7" with the fair skin of woman raised in wealth. She has a slim curvy build and bright blue eyes, the very picture of loveliness. Her soft brown hair falls to her hip in loose ringlets though it is usually tied up in elaborate ways. She moves with grace and poise and is impeccably dressed at all times. Her upper class British accent seems to carry with it an enchanting quality. She is often found wearing a black trench coat with a shield painted on the back with a Celtic knot design made of thorns with the Latin phrase "Shield of thorns" underneath it. Gorgeous x3 and Seductive.

Flogging Molly: The Worst Day Since Yesterday
Florence and the Machine: Cosmic Love
Bjork: Come to Me
Kelly Clarkson: Stronger
Adelle: Set Fire to the Rain
Frou Frou: Holding Out for a Hero
Alex Clare: Too Close
Sugarland: Stuck Like Glue
Coldplay: Hurts Like Heaven
Sara Bareilles: Fariytale Sara Bareilles
Imogen Heap: Canvas
Keane: Somewhere Only We Know
Bjork: Who Is It
Alex Clare: Relax My Beloved
Florence and the Machine: Heavy in your Arms
The Cranberries: No Need To Argue
Incubus: Love Hurts
Jeremy Messersmith: A Girl a Boy and a Graveyard
Jewel: Angel Standing By
Poe: Haunted
KT Tunstall: Heal Over
Linkin Park: Leave Out All The Rest
The Pierces: Secret
Sia: Breathe Me
Mumford& Sons: After the Storm
Drake: Take Care
These Green Eyes: Paramedic
VNV Nation: Illusion
Florence and the Machine: Breath of Life
Mumford & Sons: After the Storm