Difference between revisions of "Kelly" 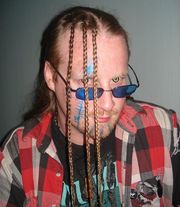 Concept: Generally perceived to be an elder who has "joined the Cam" to be left alone and manage his own feudal kingdom

Physical description:About 5'10" and well built.  His hair is dirty-strawberry blonde and skin the paleness of Irish blood.  Numerous braids of various thicknesses, some tied with cloth, some bells, some left to hang loose or with bits of bone are scattered amongst what is otherwise loose hair going down to mid-back.  Ice blue eyes shine from a face half-covered in pagan blue markings, the look of it chills the blood slightly.  The red, black and silver flannel he wears hangs heavy but is missing most of the right arm and all of the left in addition to two slits down the shoulder blades.  Under that is what was once a black t-shirt.  Similar markings to the right side of his face cover his left arm extending past the gypsy bangles on his wrists and past the obviously warded patched together leather fingerless glove and wrist strap on his left hand.  The warded black glove has a counter point in an unwarded army green fingerless wool one on his right hand.  Chains, a clay canister and several leather pouches hang from his hip partially obscuring the torn and rust stained jeans.  Down the front left leg more pagan markings extend.  The back of that leg is covered in more.  The right leg, the more torn, is covered in hatch marks. He generally wears either heavy black boots with more small bells around the ankles and tied into the laces or bare feet. 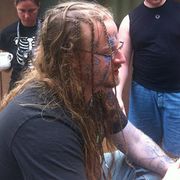 "I hate to tell you there is no Santa Claus, Piscin, but there isn't. No Waulkrie came down from Asgard to raise Svidi - a Vampire did. No Fae folk stole Kelly from his crib and sent him back 'touched' - a vampire bit him. Kurran DeSylvia didn't burst out of Gods arse with a six gun in each hand, either. Once upon a time, they were scared breathers who wanted nothing more then to eat, fuck, shit and sleep. Same with Max and Bellflower and Me. Don't let the shades of gray blind you." - One of Erik's many tirades

"What if he's really pissed?" she asks quietly.
"No possible way. I've seen Kelly well and truly angry before, and this isn't it"
"I've seen him kill while laughing before, does it really matter."

"I think Kelly has had it the hardest out of all of us." Erik on the passage of time

"I always tell the truth, I can'na see the point in lying to someone that d'no matter." -Kelly

"Remind me to never personally save the world." -Kelly

Is not really Gangrel.