Difference between revisions of "Jessica Kesch" 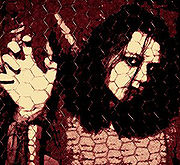 Physical description: Jessica is a plump woman with long reddish-brown hair. She's tall, but often carries herself stooped or hunched over, so she often appears shorter than she is. She is usually slightly unkempt, with wild hair, smudged makeup, etc. She dresses casually, and almost always wears red clothing or red accessories.

Kindred History: Jessica Kesch was the Malkavian Primogen in Chicago for more than two years - holding that office much longer than most of the peers with which she's served, before she was called to service as an Archon for Justicar Maris Streck of Clan Malkavian. Jessica is now rarely seen in Chicago, although she keeps an eye on the city and still has many contacts there. Now Jessica turns her extreme passion to the protection of the Camarilla and service to her Justicar. (OOC: Reputation merit - Camarilla Loyalist)

She's got a reputation for an irreverent and aggressive attitude that only barely masks a devious and clever mind underneath. Somewhat prone to violent or loud outbursts and sudden mood swings, kindred who know her tread lightly when Jessica was around.

Though she is Malkavian and proud of her heritage, Jessica is well known for her atypical stance on her own Clan. She loudly and insistently claims that she is not crazy, and that while the Clan has a tendency toward insanity because of "powerful blood," Jessica insists that "strong minded" Malkavians can weather the embrace without going mad.

Taking her philosophy to heart, Jessica demands that all Malkavians not further the stereotype of Malkavians as incompetents. She's executed - with proper permission - nearly a dozen of her own Clanmates who "couldn't handle it" or "went bad."

Jessica is known to be the eldest childe of a respected Malkavian elder, JuStin Griffin, aka "Sting." Before he met with final death, she was known to be very - some said unhealthily - close to him. Jessica's moved on to become a well-known and respected sire herself. (OOC: Qualifies as a Prestigious Sire.)

Information known to non-kindred: Although Jessica Kesch hasn't been seen in Chicago for quite some time, her businesses are still active. She's still the owner of "The Antiquarian," a comic book shop/toy store/video arcade and unlicensed halfway house for abused children.

Kids know that this place provides a safe space with a strict no-questions-asked policy. The older siblings of her wards - often members of South Side gangs - respect the Antiquarian as strictly "off limits."

The Antiquarian is still considered a safe haven on Chicago's South Side for wayward kids, even though the place is occasionally plagued by strange troubles, such as late-night robberies. With the protection of the local gangs and Jessica's boundless generosity, it's still safer than many alternatives.

It's known that Jessica also owns a business in Oregon, a day-and-night care facility called "The Dreaming," which provides low-income families and single mothers with affordable child care.

No one's seen Jessica at either of these places in a very long time, although they still operate and occasionally receive improvement funds from her.

Alice in Wonderland, Through the Looking Glass, The Stepford Wives

"Jessica Kesch: She's from the Midwest, and is an archon these days. She bakes awesome cookies and you should be nice to her because if you're not you're a bad person and bad people get cut up with a chainsaw."