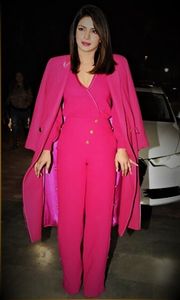 Genevieve Solomon is known for her signature color of bright pink

Physical description: Genevieve stands at 5'5" and is generally dressed in Pink. Skirts are less common, especially in recent nights, but Pink is the color to wear, at least for her. She can always be seen wearing a emerald green dragon scale necklace. Her dark auburn hair is fairly often seen in a ponytail with some form a ribbon tied around it.

Arriving in America from Europe in 2013 and settled in the Domain of Kenosha, WI, she is the known childer of Former Prince Rick Solomon who died defending his domain from the Technocracy. During her five year residency in the domain of Kenosha, Genevieve served as the Domain's Assistant Keeper, Keeper, Harpy, and finally its ascending to the position of Prince on October 18th, 2017. She held the Praxis of Kenosha until May 3rd, 2019 when she ceded the praxis to Jason Wilkes in a bloodless praxis seizure.

A year later, she challenged for the Praxis of the Western Shores, coming into contention with Olaf, the out going prince's childer, and Jason Wilkes, who had lost his Kenosha Praxis to Olivia of Clan Gangrel within a few weeks of gaining it. For unknown reasons', Genevieve withdrew her name from the Praxis contest. When the dust settled from the departure of Former Sovereign Prince Pagan, Jason Wilkes rose as the Prince of the Western Shores with Genevieve and Matthias Warren standing as his seneschals of the North and South.

"Thaumaturgy isn't the only magic this Tremere wields. Ask the Ventrue."