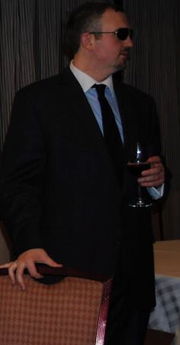 Lono at the Northeast Event 2012

Physical description:Lono is slighty over six feet tall with a goatee and dark salt and pepper hair. He is generally seen wearing a conservative suit with a variety of shoe styles and either sunglasses, leather gloves, or both.

Lono was either born or spent his youth in and around the Middle East, though he doesn't often discuss specifics. He has made occassional reference to a life spent in either the military or organized crime.

He moved to New York state in June of 2011 along with some associates from Europe. Although a new arrival, his effective soon assured that he was winning Status from the Court and became the Brujah Primogen in short order.

After the death of his Prince, Lono moved on from the Northeast without much fanfare. His current whereabouts are unknown.

The closest Kindred to Lono are his work associates at Global Solutions Consultants, LLC. Circumstances have led several of these associates to holding Court positions so he is seen with them often in and out of work. Whether or not they form a coterie is open to debate.