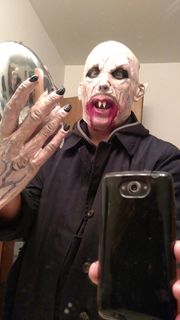 Reigning Midwinter Sweater Champion after winning it in 2016.

Can I have that?

This is Raymond. He's very well behaved, and he gives the best kisses.

I can help dispose of that body.

This is Fourth. Sometimes I'm lazy and name them in the order that I snack.

I think this sweater makes me look very official. When I tell people that I'm the Harpy of La Crosse, they reply, "Of Course You Are."

This is Merlin. He's very wise.