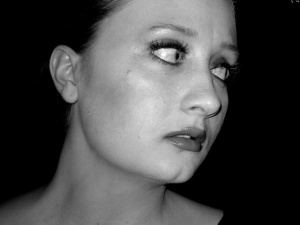 MJ is a fiesty blonde who doesn't take shit or no for an answer. However she's not the typical Grrr smash Brujah. MJ was thrown in to the deep end early on and has been taking the lead ever since. The fact that her sire is well known has given her a leg up in Camerilla politics, but she has to constantly be on guard because she never knows what he'll do next. She is a resident and the Senechal of the Carbondale, IL domain currently, but frequents the Springfield, IL domain where her sire is currently prince. She's fair, but firm and she will put you in your place if you need it.

MJ spent time as a ghoul in Mexico with a church to keep tabs on the sabbatt. She previously served as senechal under (former) Prince Theadora Carlisle in St. Clair and Madison Counties and is in charge of the southern branch of Lockhardt Tactical weapons manufacturing. You might have recognized her in a public service announcement for gun safety if you're from the Midwest. In the winter of 2011 MJ went Mediterranean tour with Oliver Freigh, meeting such dignitaries as former Justicar Lucian in Crete and Prince Mustafa of Istanbul.

MJ! not MJ, she'd never do anything like be in a coterie

MJ is rumored to:

Her Sire is rumored to: