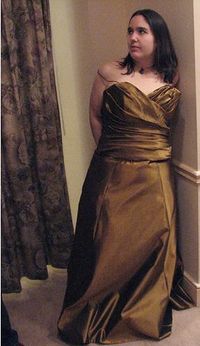 When not busy being an Inhumane Monster, Elissa enjoys High Society

Immigrated to the US in 2007 - originally part of the Chantry in Washington, DC but transferred to Berkeley, CA.

Served as Primogen under Alex Neidrich and Gideon daVinici, as well as Sheriff to daVinci.

Moved to Santa Rosa, CA in 2009. Served as Primogen and then Seneschal.

Killed by Tsimisze alongside Geoffrey Tanner October 7, 2011 in San Francisco.

Rolling In The Deep - Adele - http://www.youtube.com/watch?v=rYEDA3JcQqw

On the Mend - Foo Fighters - http://www.youtube.com/watch?v=GwxT6ZjXYzs

Elissa Maxwell is insane.
Elissa Maxwell pretends to be crazy in order to get away with shit.
Elissa is in House Horned Society. (Tremere Only)
Elissa Maxwell was romantically involved with an Assamite.
Every man Elissa has been involved with has been slain or otherwise come to ruin.
Elissa Maxwell is related to Elliot Maxwell
Elissa pretends to not know the nickname "Mad Maxwell", but secretly enjoys the reputation.
Assamites once gave her the nickname "Black Widow"
Elissa was lovers with Alex Neidrich and was gifted many of his possessions in his will, namely his famed Stradivarius violin.
Elissa was directly responsible for Alex Neidrich's death.
Elissa is a concert-level violionist.
Elissa has opened her own winery in Sonoma and produces blood wine.
Elissa Maxwell built a Memorial Garden in Alex Neidrich's memory in Greater Berkeley but an In-n-Out Burger and Scientology bookstore was built on it, mocking her allegedly 'permissive' nature.
The real reason why there is bad blood between Elissa Maxwell, Kathrin Braddock and Kate Davidson is because of bizarre love triangle that went south. None of the three of them will ever talk about what really happened.
When asked if the rumor that she was planning on killing Kathrin Braddock was true, Elissa told an Archon, 'No, but I would like to see her dead.' The Archon apparently appreciated her honesty.
Elissa is suspected of using roses as vessels of transference at social events.
Elissa spies on conversations through plants and flowers that she controls.
Now that her "Ex" husband Winston Warchild is back in town, she's wants to get back together. When she dates self destructive men, they STAY destroyed. Is this the one man strong enough to break her curse? (literal curse)
Worked with Marcus Jovan to remove Winston Warchild from his Praxis because he left her after they had been married less than 4 months.
Elissa's nickname amongst those who know her well is 'the cryborg.' This is because when she isn't being an inhuman killing machine, it's because she's sobbing pitifully about something.
Elissa keeps Brujah pretty-boi "Apollo" around as her pet, in the hope that his humanity will rub off on her. It isn't working.
Elissa Maxwell was not killed by the sabbat. She was killed by another Tremere. Geoffrey Tanner was at the wrong place at the wrong time.
Was blood bound lovers with San Francisco's Scourge, Geoffrey Tanner - she died defending his life though they had broken the bond only days before.