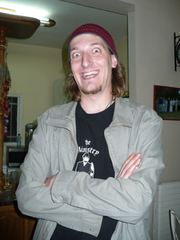 Dorrian, Just after being elected primogen

Arrived to Jerusalem at 2008 for unknown reasons. Has since became a primogen a month after arriving, only to become Seneschal two years later. Is known to suffer amnesia and flashbacks that take him back to unknown eras.

Many people i met in real life who are completely insane...