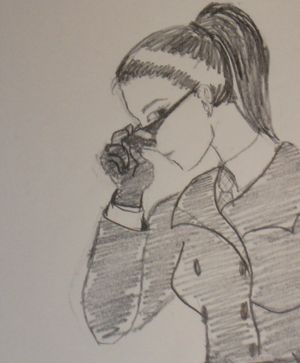 Physical description: Tall, thin, and studious, with long black hair normally worn back in a tight braid and an introspective, but intelligent, look. Usually found wearing a long black coat and tall boots over neat black collared shirts and black ties. She has black and silver tattoos traced on the inside of her wrists, though these are rarely seen with the gloves she wears. Anđela also wears dark sunglasses covering her eyes.

Introspective and introvertive, though very intelligent, Anđela rarely speaks. When she does offer up information, it tends to be uniquely insightful.

Anđela has spoken of her time as a mortal as having lived in Belgrade, Serbia. She has spoken of seeing the fall of Communist Yugoslavia and the Kosovo war, being a witness to the NATO bombings of Ušće Tower, and being a student at the University of Belgrade. She was ghouled in Belgrade for two years, and has spent the rest of her time as a Kindred in the same location until her transfer to Santa Rosa, CA. She remained in Santa Rosa for around a year an a half, holding the position of Whip under Saskia Dietrich. She assisted the Sheriff and the Scourge, though never formally accepting positions under either. In mid 2013, she moved to New Haven, Ca.

The Tremere of New Haven, California.

Hard to make them when you don't talk.

We do not talk about him.

"Oh, you should see what his coat says about him." On Vladius, to Nathan Ripley
"Come on, tell me where he went, tell me, tell me!" to a wall, on discovery that she was being spied on.
Saskia Dietrich:"What are you doing?" "I'm people watching. It is fascinating, the things you can learn from it..." "You're so weird Andela."