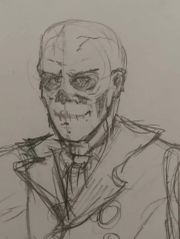 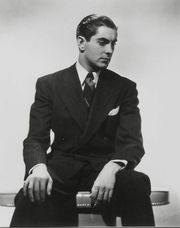 His age isnt apparent when unmasked

Concept: Actor who fell from stardom,and ends up looking very much like the phantom of the opera.

Physical description: When masked he usually has dark brown hair and eyes, an angular face and matinee idol appearance.

Unmasked he looks like a flesh toned version of red-skull with dark black veins all over his body where his veins are.

Ames was born in a small town in Georgia in 1915 but quickly found his way to Florida and to Stetson University in 1933,where he majored in theater. A charming handsome man with a talented stage presence he found himself a successful vaudeville and stage performer when he left the small town to seek his fortune in New York city.

Slowly though the actor found more success in film and stage, leaving the group when he could find a place to afford on his own. He was drafted into the US Navy in December of 1941. He was stationed in the Pacific aboard the USS Yorktown during the battle of midway that sent him home and spent months in a military hospital afterward healing from his injuries.

His life took him back to the stage briefly for a year, though not nearly as successfully as at twenty five he still had the dark handsomely looks that had helped him secure roles for years but had gained a permanent limp from his time in the pacific. He began finding alternative means to get the money to keep himself sheltered and fed in seedy areas.

It was walking home from the train coming from Manhattan one night that he found himself given both a blessing and a curse in the form of the embrace.

It was difficult at first but once he gained experience in his new life Ames found himself rather good at it and made his way around the South with his sire and was Acknowledged in Savannah GA by Prince Sinclair.

Ames kept a realitively low profile before coming to St.Augustine where he has been assisting the Domain in their fight against the sabbat.

A Nosferatu who was living in NYC who took pity on the veteran and struggling actor.

lost in Hollywood- system of a down

This is Me- grearest showman